James Carter’s dissident physics theory of “Gravitational Expansion” rose to fame with the book “Physics on the Fringe” by Margaret Wertheim. Many even in the dissident world are not that familiar with Carter’s work and journey. Having just read his new book “A Child’s Garden of Physics“, I can tell you that Carter bares all in a very candid picture of his life’s story and his scientific journey including his run-ins with mainstream physics in universities, his meetings and conversations with John Chappell, his dealings with the NPA, and his dealings with author Margaret Wertheim.

For those not familiar, James Carter’s work involves the Circlon Model of Nuclear Structure, and his Gravitational Expansion of mass, space, and time.

The Circlon Model is a model based on ring structures in which Carter recreates the entirety of the periodic table. You can download this amazing chart from Carter’s website: 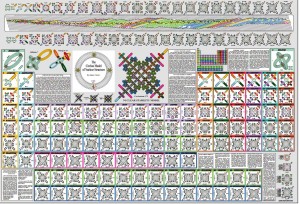 Carter’s work reminds one of Dr. Vladimir B. Ginzburg‘s Unified Spiral Field and Matter theory. Both men have recreated the periodic table and atomic structure.  Often dissidents in the CNPS get confused by such endeavors often dismissing them as just another model for the universe. But in this CNPS member’s opinion, models are overlooked by many in the CNPS and that is to the group’s detriment. 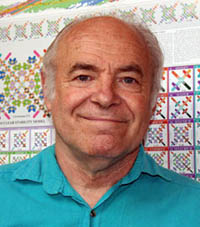 Jim Carter, author of a new book “A Child’s Garden of Physics”.

Carter also states that gravity is caused by the earth growing at a speed that pushes masses and causes the effect we call gravity. Author Margaret Wertheim dismisses this model and theory as an impossibility and an interesting curiosity from a very active mind that has come up with a simple explanation for a very complicated universe. Yes, it first seems outrageous that gravity would be caused by the earth expanding towards us. But this is no more outrageous than “space-time” bending to cause gravity. As I always say to scientists in the CNPS: never dismiss ideas that seem crazy or very different from others. Carter, like most all CNPS scientists spend years, decades, and lifetimes perfecting their models and theories and there is always truth in what everyone says.

Carter even proposes experiments to prove his gravitational expansion theory but he admits it would also prove general relativity correct as well. I recommend reading Jim’s theory and seeing for yourself that there are many worth-while concepts. I know in my own current work with my father that the nuclear structure work by Carter is well-worth studying for our own particle model.

A very fascinating read is that over 60% of the book is the personal journey of a man, his struggles in life, his adventures on the farm, and more detailed, his life as an underwater abalone farmer that eventually lead him to a crucial break in his theory for atomic structure. It was on the ocean when he first saw the donut-shaped bubbles that popped to the surface from divers. This fascinated Carter and it inspired his Circlon Model of Nuclear Structure. The author also witnessed a school of dolphins sending rings in his direction underwater which Cater eventually recreated in smoke on land with canons. This was crucial to Carter’s theory and having it told in the bigger picture of his life’s journey gives one a greater insight to Carter’s theory and insight into inspiration for big ideas that one rarely gets to read – especially in the first person.

Most of the time we only get the theory and not the journey. In Carter’s case, he never holds back on intimate details of that journey, his emotional reactions and feelings, and how that affected his thinking for his own scientific endeavor.

Encountering Mainstream and the NPA

The more interesting parts of the book involve the detailed accounts of Carter’s “dissident” science journey starting with universities. Like all dissidents working in isolation (that is a common theme), Carter wanted to share his discoveries with other scientists. Assuming that mainstream scientists would be open to new ideas, James describes his chance and planned encounters with mainstream science. From an engineer from Wisconsin University that gave James a lift while James was hitch-hiking, to physics professors at the University of California, Long Beach. Coincidently, this blog author and his family in 2010 hosted an NPA conference at Cal State Long Beach in which Carter and Wertheim attended.

Carter describes in detail his interactions and attempts to talk to mainstream scientists about his ideas and meeting with simple dismissal to out-and-out formal rejections. Carter also talks about his submission of his work to the NPA and how he felt his paper was altered and that the NPA in his mind is no better than mainstream science in that the NPA proceedings tries to make all the papers read the same. His other interesting observation is that the NPA has a bias for aether theory and that theories like his own are not well-received. It is a fascinating look into the perception of a true “independent thinker” and his theory and he feeling like an outsider to the outsiders.

Carter’s own 15 minutes of fame was being chosen by Margaret Wertheim to be featured in her book Physics on the Fringe where Wertheim, a staunch supporter of mainstream science, dives into the “underworld” of dissident physics.  In Carter’s book, he details the documentary film Wertheim helped produce about Carter and Carter’s more recent participation in her Physics on the Fringe book.

And Carter in this point, is correct: dissident scientists should have their theories examined seriously and not be marginalized.

Lessons for the CNPS

The NPA (now the CNPS) should take note of Cater’s problems he has with the organization. Carter reminisces about his conversations with NPA founder John Chappell and how after his death, he felt a decline in allowing for theories like his own being recognized among the “aether-prevalent” NPA dissident community.

Carter also felt that the editing of his paper for the NPA proceedings went beyond helpful and became demagogic.

I truly believe the NPA editors at the time were not intending this to happen. But we in the current CNPS need to think about how to accommodate those dissidents like Carter (and there are numerous) with more comprehensive theories that are not aether theories. How should and do we accommodate these scientists in the CNPS? Many members are not sure themselves. This book brings this question to the forefront.

Carter’s book is truly heart-felt, extremely revealing both personally and scientifically, and even if you are not a big fan of his theory, the book is worth the read in that there is a lot to learn about what it truly is like to be a dissident scientist with a dissident theory in the modern world of physics today.