Below is a post from Gene Ellis. I don’t necessarily agree or disagree with his views, but CNPS welcomes new ideas on a wide variety of science topics, so please comment and let us know your thoughts.

Energy level data was compiled in 1970 by Charlotte E. Moore; NBS-34, Ionization Potentials and Ionization Limits Derived from the Analysis of Optical Spectra.  The defined ionization potential of an element is a measure of its ability to enter chemical reactions requiring ion formation or donation of electrons and is related to the nature of the chemical bonding in compounds formed by elements.  Ionization, however, encompasses more than this definition.  The ionization potentials and limits shown in Table 1 are energy levels in electron volts that correspond to the electron activity of the elemental atoms.  One electron volt (1eV) is the amount of energy an electron gains moving through a potential of one volt in a vacuum.  For each element, the largest number in each row is the energy limit in electron volts.  When reading the chart from right to left (from past to present) it marks the first time the element is able to enter a reaction or bond.   Prior to the time of this first ionization, the element is neutral because no electrons are detected or interacting as an electromagnetic force. Since the mass of an element is unchanging before the time of its highest ionization (potential) and the presence of such masses are not analytically revealed, those masses would be classified as dark matter.

The time an element first ionizes raises another question…whether the electrons appear singularly at each ionization level or all at once at the highest level?  Resolution of this “unknown” could alter our present concept of the quantum-mechanical model of the atom.

An anomaly is noted when the small incremental jumps between energy levels become large jumps as highlighted in Table IR.  These large jumps create a pattern and indicate something different occurring within the atoms.  These occurrences, as presented in the IGE 8-Element Supplement, are attributed to entropy for when the elemental atoms are heating.

Knowing the time as related to the spectrum, changes what we think we know about our planet and the universe.  Before calcium ionized for the first time ~8800 MYA, all elemental matter was dark matter.  Depending upon how electrons emerge, water did not exist until oxygen ionized either ~1400 MYA or ~1200 MYA.  Hydrocarbons probably did not arrive until ~800 MYA and all hydrogen existed as dark matter until ~ 22 MYA when it ionized for the first time and could join to become a molecule (H2).

When the growing and heating phases of the eight elements that comprise 98.8% of Earth’s matter are plotted as in Figures 1R and 2R, it is obvious the planet was primarily heating for the first 3000-3500 million years of its existence.  During this time there was very little change in the size of the planet.  Molten crustal rock solidified after water arrived as the cooling agent ~1200 or ~1400 MYA.  Consequently, radiometric dating only extends back to such time when rock solidified.  The chart also indicates exponential growth essentially beginning ~700-800 MYA.

All of the above result from when the energy decay rate (1eV/1.6 MY) is applied to the Ionization Potentials and Ionization Limits of NBS-34 and illustrates:

Ionization is a mechanism conditionally allowing elements to join at certain energy levels.

Ionization is the mechanism that emerges the electrons to make dark matter spectra visible.

Ionization also is a switch-like mechanism that directs energy to convert to mass or to entropy that grows and heats elemental atoms. 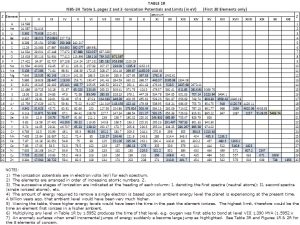 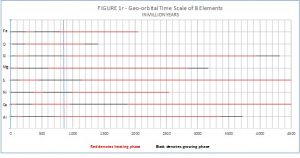 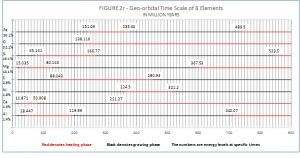 Earth’s internal heat from radioactive decay is an addition to the heat from elemental decay.