Below is a post on taking a new look at many topics. It’s from Kent Mayhew. I don’t necessarily agree or disagree with his views, but CNPS welcomes new ideas on thermodynamics, so please comment and let us know your thoughts.

This blog is in honour of  Paul Marmet (1932-2005). He was a Canadian physicist who had  original constructive logic founded ideas and as such he was truly ostracized by his peers for not towing the line. Marmets papers can be found online:

In my previous blogs & papers I have basically argued that entropy is nothing more than a mathematical contrivance, therefore in its fundamental context, entropy should not apply to cosmology. Concerning cosmology I personally do not know whether or not the Big Bang happened, although I was certainly taught that Hubble’s contemplation was the only way to think (at least pass the course). I am sure that there are those in the NPA who feel strongly one way or another. The one thing that I do believe is that Wilson’s discovery of Cosmic Background Radiation (CBR) may very likely have nothing to do with the Big Bang. Let me try to explain.

Early in the 21st century, me the simpleton, had gotten to the point that I suspected that scientist loved to complicate our simple realties. In that light, I remember pondering that CBR may be nothing more black body radiation of dark matter, which implies that dark matter may not be all that mysterious, after all. Specifically dark matter might be nothing more than cold matter, so cold that its mean temperature is 3 degree Kelvin, hence it is optically dark. At this point I had no notion as too what constituted dark matter, but just that gut feeling.

A few years ago, I began reading Marmet’s papers, and realized that Paul Marmet was way ahead of me in such thought i.e. “From astronomical observations we observe that most matter in the universe is in the gas phase at 3 K.”  “We show that the 3 K radiation spectrum observed is simply the Planck’s radiation emitted by gaseous matter at 3 K. “  [Paul Marmet  “The Origin of the 3 K radiation” Apeiron, Vol.2. Nr. January 1995]

Marmet’s notion that CBR was nothing more than gaseous matter’s blackbody radiation made me smile, and wish that he was still alive.

The traditional idea is that CBR is the 3 K radiation, which is believed by many to be a remnant of the Big Bang. In Big bang theorization the early universe was too dense and hot, hence light could not pass through it. Approximately 15 billion yrs ago radiation decoupled from matter, meaning our expanding universe reached a state (around 3000 K) where it was sufficiently transparent that light could travel cosmic distances without significant absorption.

And, it is argued that as the universe expands its entropy increases and this equally applies to radiation hence the temperature associated with the big bang has resulted in a temperature decrease of radiation to the point that it resembles black body radiation of a 3 degree Kelvin body. Those who have read my previous blogs will know that I am not a big fan of any such entropy based conceptualization. Interestingly, Marmet further argued that the big bang is similar to creation theory, in that it may be more of a tale rather than a scientific theory based upon a combination of observation and constructive logic.

Where Paul Marmet was way ahead of me was his consideration that our universe is filled with atomic hydrogen (H). “Atomic hydrogen is composed of an electron electrically bound to a proton forming neutral hydrogen. Protons, just as electrons have a fundamental property called “spin”. In a hydrogen atom, those spins are coupled either parallel or anti parallel. The interesting point is that a transition from a parallel to an anti parallel coupling of spins in hydrogen (and vice versa) takes place when hydrogen is emitting (or absorbing) electromagnetic radiation at a wavelength of 21 cm. Consequently, one can determine the amount of atomic hydrogen H in the universe by measuring the amount of radiation absorbed (or emitted) at 21 cm. The actual observation of the 21 cm. line proves that there is a very abundant amount of atomic hydrogen in the universe.”

If I understand Marmet’s papers correctly, then his above conclusion is that the CBR is nothing more a result of hydrogen molecule transitory spins. Herein I depart from Marmet’s thought process. To me the simpler solution remained: CBR is nothing more than cold matter absorbing the surrounding thermal energy and then radiating it as 3 degree K blackbody. Of course this requires intermolecular bonding and vibrations, similar to that found in all condensed matter. Importantly, Marmet pointed out that atomic hydrogen (H) is unstable, and given the chance over sufficient time they will form more stable molecular hydrogen (H2). This has all been backed by observations in spectroscopy.

The question now becomes why would such a simple argument be blatantly ignored by the Paul Marmet and/or other powers within the sciences. Well beyond such a simple conceptualization of mysterious dark matter, the real show stopper lay in kinetic theory. Let me explain (sorry this will take a few pages).

On a personal note/sidetrack: Now the following is based upon a paper that I am considering publishing, so I do not know how much I should discuss herein. I will say this much, I am having trouble financing my publications hence I am actually trying to get an alliance with a research group associated with Gerald Pollack (who is a wonderfully open minded individual.) This is a long shot that I really doubt will happen by my paper on kinetic theory was presented to this group. Furthermore, I also self-published the correct kinetic theory equations in my first edition book but choose a poor analysis, and this has been rewritten in my hopefully to be published sometime revised edition of may infamous book that noone will ever read.

Back to our discussion. From, my paper: Concerning “The conceptualization of a gaseous system’s kinematics originated in the writings of the 19th century greats. In 1875, Maxwell wrote:

The pressure of the gas depends, as we have seen, on the energy of translation alone. The specific heat depends on the rate at which the whole energy, kinetic and potential, increases as the temperature rises.

It is interesting to note Maxwell’s surprise at the ratio of energies (the translational motion and the rotational and/or vibrational) being equal, as not even he expected this traditionally accepted result. This was followed by the work of Boltzmann with his conceptualization of statistical ensembles, led to the 20th century understanding of the determination of molecular energy using statistical analysis and equipartition. It is currently accepted that the specific heat of gases can be best explained in terms of equipartition theory, and degrees of freedom.

The law of equipartition states that the total energy of a gas is equally distributed among all of its degrees of freedom. Equipartition theorem is based upon the energy of a system being defined by a set of f generalized coordinates and their corresponding generalized momentum. “  End of part of my paper

The full traditional analysis can be found in many texts. To summarize, although the logic of traditional kinetic theory was questioned by Maxwell, it’s application was fully endorsed and seemingly reinforced by the law of equipartition. What is truly interesting is that this boldly embraced our traditional analysis, which BTW has many accepted exceptions. Two fundamental ones being:

The two above exceptions certainly make traditional theory fit empirical data but I invite anyone to explain the logic behind such thought. Certainly any ball/object in motion can have both rotational and translational energy. So what makes a gas molecule any different? And why would anyone buy into the concept that polyatomic molecules all have vibrational energy with the exception being diatomic molecules.

The consequence of the above is that kinetic theory should be rewritten. Interestingly when it is done then the theory will match empirical data more closely than current degrees of freedom based kinetic theory does.

And my new kinetic theory equation is basically

Where n” signifies the number of atoms in each gas molecule which we shall call the polyatomic number. Note this energy can be shown to be the basis of the isometric specific heat of N gaseous molecules.

The net result can be clearly seen in  Graph 1. It  clearly shows  that my equations for both isobaric (Cp) and isometric (Cv) specific heats of gases closely follows that of accepted empirical data, while the traditional theoretical accepted equations has a completely different slope when compared to the same accepted empirical results. 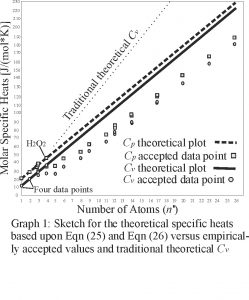 As a final point the difference between isobaric specific heat (constant pressure) and isometric specific heat (constant volume) is this. For the isometric case the Earth’s atmosphere is not displaced. Conversely for the isobaric case, the system of gas expands at constant pressure as it is heated, hence the surrounding Earth’s atmosphere is upwardly displaced, hence work is done onto the surrounding atmosphere. It is easy to show that  this means that the isobaric specific heat is greater than the isometric specific heat by PdV that being the work done onto the atmosphere. And in the case of a mole of molecules this equates to the universal gas constant (R) and for a solitary molecule this would be Boltzmann’s constant (k).  In other words Boltzmann’s constant and the ideal gas constants become a representation of a system’s ability to do work as a function of temperature in a given gravitational field.

Now let us return to our discussion concerning CBR.

Accepting the above, then we can now consider that Marmet’s molecular hydrogen and my new kinetic theory can explain CBR. If so, then CBR may no longer have anything to do with the Big Bang.  This does not mean that the Big Bang did or did not happen

But it does mean that:

1) Entropy based arguments concerning the remnants of the big bang and CBR maybe another case of mankind complicating the simple.

2) Dark matter maybe nothing more than molecular hydrogen (H2) as Marmet has proposed.  This lends itself to dark matter pervading our universe and being nothing more than matter, which is so cold hence that it is optically dark. Of course such considerations concerning dark matter may very well not be palatable to those who envision dark matter as a complex mystical entity. It does allow for things like intergalactic speeds increasing rather than slowing.

Side Notes: I am not sure if anyone is interested but I wrote a book that I was hoping would lead to people rethinking thermodynamics. I am currently rewriting this book and am looking for assistance. If you know of anyone interested in reading and possibly commenting assistance or anything please let me know.  It requires common sense and an open mind first and foremost.

Also I would like it if someone interested in kinetic theory but who has no affiliation or vested interest in current kinetic theory, to read and comment upon my paper concerning kinetic theory.