Below is a post on taking a new look at thermodynamics and the concept of work. It’s from Kent Mayhew. I don’t necessarily agree or disagree with his views, but CNPS welcomes new ideas, so please comment and let us know your thoughts.

To the good people of the CNPS who are really interested in thermodynamics, here are some thoughts – please let me know what you think as this is a new consideration for thermodynamics

In my previous blogs, I have discussed that lost work (Wlost) involved the displacement of Earth’s atmosphere against gravity. And it is equal to

Where Patm is the atmosphere’s pressure and dV is the displacement volume or if you prefer the volume of the expanding system.

Although “negative work” conceptually feels counterintuitive, it is mathematically expressed by simply placing a negative sign in front of the work term. To visualize negative work, all one needs to do is to take a syringe, and place the plunger all the way to the bottom as is illustrated in the top of Fig. 1.7.9.  Now hermetically seal the syringe’s opening with your finger and finally apply a volume expanding force (pull out on the syringe’s plunger). The volume inside the syringe expands, thus we are performing negative work onto the volume of space that is now being created the inside of the syringe. 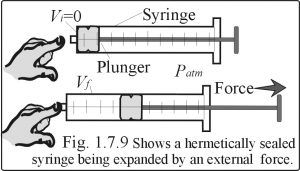 If the initial volume (Vi) of gas within the expanding volume was zero, then our expansion of the hermetically sealed syringe to some final volume (Vf), means that our final pressure (Pf) is that of a vacuum (zero pressure). Therefore, ignoring any blackbody radiation within the syringe, then our final energy state within that created volume is zero. Accordingly, the work done onto the volume within the syringe (Wvol) in creating the vacuum is:

From an energy perspective, we could say that that the plunger went crashing down into the syringe because the interior of the syringe signified negative work, when compared to its surroundings, hence, was an inherently unstable volume. Ultimately, when a volume of nothingness displaces a mass in a gravitational field, then this is negative work to the volume that was previously occupied by that mass.

Again, how we consider the work may be a matter of perspective. From a thermodynamics perspective, the expansion of the syringe does not mean much. We could take the syringe full of nothing, bring it into outer space, then release the plunger and nothing will happen. However, claiming that nothing happens is from the perspective of inside the syringe. The reality is that a volume of something replaces the volume that was once occupied by the syringe, as we bring the syringe out into Earth’s atmosphere’s surroundings, i.e. outer space. Okay are now verging upon metaphysics.

If only the man on the moon knew all the intricacies going on in the system Earth, he would then understand that there were no real changes, due to the syringe’s expansion. We must emphasize that the created vacuum is not exactly a volume of nothing because it does contain blackbody radiation, but the point is in terms of mass in a gravitational field, the vacuum is a volume of nothingness. Adding or subtracting a volume of nothingness to a system does not necessarily change the system’s total energy.

From the perspective of Earth and its surrounding atmosphere as a system, again the expansion of the syringe did not represent a change to the system’s energy. Although Earth’s atmosphere was upwardly displaced, the magnitude of the potential energy increase equals the magnitude for the negative work associated with the expanded volume.

A mathematical analogy for this work is obtained by defining the process as isothermal (dT=0), thus the ideal gas law [PV=NkT] tells us that the pressure multiplied by volume equals a constant (C’), i.e.:

which can be rewritten for the isothermal work as:

Eqn 9 adheres to the traditional conceptualization for work. However, it possesses the following inherent ambiguity that is not traditionally acknowledged. That being that it can equally be written in terms of pressure change,

Although it is a moot point, a possible reason that traditional thermodynamics is always written in eqn 9 rather than eqn 10 is the preference of volume over pressure as a parameter of relevance. In my previous blogs, I gave a reason for this oversight, namely, that volume increases are wrongly attributed to entropy increases, when entropy (S) is considered in terms of Boltzmann’s consideration [S=kIn(@)], where @ is the number of accessible states

Thanks for reading what I write.

I am still looking for help in rewriting the science. It is mostly done, but I need to throw ideas off of some people to see if they understand it and the more brains involved, the better the final product and, hopefully, outcome will be.  If it interests anyone with an open, scientific mind and a thick skin and who wants to actually accomplish something, please contact me.