We are all saddened at another passing of a CNPS member and 2009 Sagnac Award winner, Alex Scarborough. He was one of the first champions of expansion tectonics in our group and was active in  other areas including Kepler’s laws and abiotic oil. Expansion tectonics being one of my favorite subjects, I am happy the NPA (now the CNPS) gave him the award.  I only knew him in his later years but according to his daughter, he was quite a strong and dashing personality. During one lunch I had with he and his daughter, Alex plopped a hard lump of what seemed to be coal on the table. He then asked me: “what is that?” I said it was coal. He said “wrong: it is crude oil I have been saving for over a decade and it is morphing into coal”. 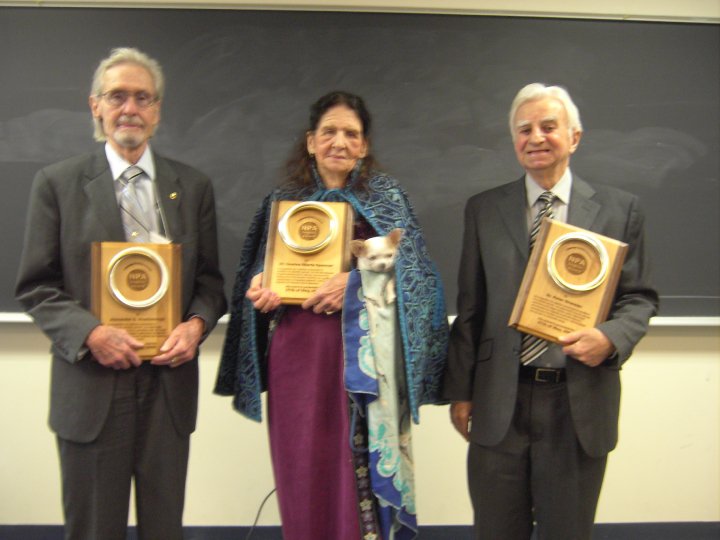 Alex Scarborough to the left in great company with Dr. Eberly Spencer and Dr. Peter Graneau

One of Alex’s other thesis was that oil was abiotic or not produced by squashed dinosaurs but inside the earth along with water and methane. Something many in the CNPS now subscribe to. Alex was truly ahead of his time!

Here is a obituary that talks about his life. The original text can be found here.

From his CNPS bio in his own words.:

“I, Alexander Alan Scarborough, am a Georgia native. The past 35 years of my research has resulted in the Fourth and Fifth Laws of Planetary Motion that, along with Kepler’s First Three Laws, reveal much about our Solar System: its dynamic, fiery birth, how and why the ten original planets became geometrically spaced, the small changes in orbital velocities and distances of planets from the Sun since its origin, plus why and how its nine remaining planets are evolving through five stages of evolution at rates in accord with size and distance from the Sun. My LB/FLINE (Little Bangs/Five Laws of Planetary Motion-Internal Nucleosynthesis-Evolution) model takes the reader from the dark void of absolute-zero temperature to dense black holes (spheres) to galaxies, to multiple varieties of solar systems, and into the reasons Earth (and all planets) go through expansion cycles via internal nucleosynthesis (E=mc2). The above knowledge stems from my Energy Fuels Concept (1973-1980) that reveals the origin and intimate relationship of hydrocarbon fuels (gas, oil, coal) – not from fossils! My tenth cumulative edition on origins is scheduled for publication (2008) this summer: 325 pages, illustrated.”

Alexander Alan Scarborough, 92, of LaGrange, GA passed away May 6th, 2016. “Alan”, “Alex”, “Alec” was born May 15, 1923 and grew up in the Methodist Home for Children in Macon, GA where he had been placed at age 16 months along with two sisters. He scored the third highest in central Georgia on the SAT in 1941, and was awarded a scholarship for the first year to the University of GA where he completed a B.S. in chemistry in three years. He worked his way through college with a job in the UGA library, and participated in freshman track and basketball. In 1944-1945 he served in WWII in Italy for eight months training as a combat engineer to invade Japan. While in Italy he won first place in the rifle competition. Japan surrendered while he was on his way to invade Japan. The troopship was diverted into Boston Harbor; he was saved by the atomic bombs. Upon return to the USA he attended GA Tech two years on the GI bill to study chemical engineering to complete another degree. The only A+ he made at GA Tech was in an R&D project; that’s when he knew he was meant to pursue R&D as a career. In 1959 he moved to LaGrange with his wife, Mary Frances, and three children, Mickey, Kathy and Kay to work for Callaway Mills as the Chief Chemist in the Research and Development Lab. They joined the First Methodist Church. He retired January 1st, 1990 from Kleen-Tex International in Research & Development. Upon retirement he participated in the Georgia Golden Olympics between ages 68-72, and won several track and field events, seven gold medals at State level. He and his wife traveled extensively, and his dream of visiting all 50 states – along with ten foreign countries – came true. 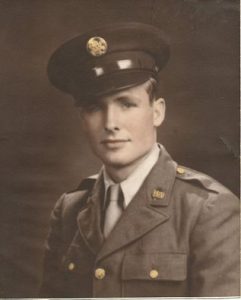 Alex Scarborough in the Military

In 1959 he conceived the idea of a durable cotton-pile mat for rentals by industrial laundries, and wrote the specifications for its initial production by Callaway Mills. The Kex Walk-Off mat proved to be an instant success as it evolved through further improvements to become a billion-dollar product on an international scale. He submitted a total of 36 patentable ideas during his 12 years of R&D and problem-solving for the five production plants of Callaway-Milliken.

In his science career he discovered the fourth and fifth laws of planetary motion (1980-2006) and the SO-FLINE-BEC model of ongoing origins and evolution of universal systems, all during a lifetime of curiosity dedicated to truth in science.

In the 1970s his discoveries of how Planet Earth created (and still creates) its huge amounts of intimately related hydrocarbon fuels (gas, oil, coal) along with its vast volumes of water and land soon led to the realization that all planets and moons evolve through five observable stages of evolution at rates in accord with mass. Interlocking these findings with history’s greatest discoveries – from Pythagoras to modern-day space probes – resulted in a definitive understanding of our Universe: the ongoing repetitive 15-stage cycles of a rapidly expanding, globally shaped Universe – from Void to Energy to Universal Systems via the SO-FLINE-BEC (SOFB) model of origins and evolution of God’s Universe, bringing the Copernican Revolution full circle – a concept destined to displace the Big Bang myth.
Astronomers know that the Universe is expanding at an accelerating rate. The SOFB model definitively reveals the cause: the BEC process at the perimeter of our globally expanding Universe creating the Black Energy Spheres at near absolute-zero temperature (a.k.a. Black Holes, the coldest and densest form of energy) that are essential for the ongoing origins and evolution of universal systems, and for the accelerating rate of expansion of the Universe via momentum/gravity principles, thereby negating the need for a dark energy (a Big Bang belief) to push the expansion.
Throughout four decades he published bulletins, booklets, and six cumulative science books culminating in his tenth edition, Origins of Universal Systems: A Brief History of the Right Answers…Simple and Beautiful (1908) just as had been predicted by Einstein.

Factors in the developing SOFB model (most in real-time) make it easy to understand the Universe and its anomalies. One example: In a write-in contest to predict the results of collisions of 21 fragments of Comet SL9 on Jupiter, he was the only one who predicted the powerful nuclear explosions; all others (via computers) had been based on comets being dirty snowballs. Second example: His definition of a planet was easy via the SOFB model, but impossible via the Big Bang concept.

On May 27th, 2009 the NPA organization of international peers from 21 countries awarded Scarborough the first prestigious NPA Sagnac Award, “in recognition of a lifetime commitment to excellence in scientific pursuit, for empirically consistent models of an expanding earth, for sound explanations of abiogenic hydrocarbon production, and for a geometrical fourth Keplerian law based on Phi harmonics between planets.” The new model bodes a brilliant definitive future for universal sciences.