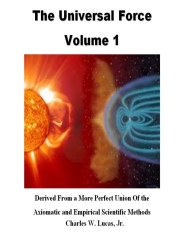 The Universal Force Volume 1: Derived From a More Perfect Union of the Axiomatic and Empirical Scientific Methods (Buy Now)

Charles William Lucas
Dr. Lucas has a B.S., M.S., and Ph.D. in theoretical physics with many honors throughout his academic career. He is attempting to lead a reformation movement in modern science to perfect the union of the ancient Greek axiomatic method of Euclid with the empirical scientific method of Isaac Newton.

Dr. Lucas has derived an improved version of the electrodynamic force by using a complete set of the empirical laws of electrodynamics as the postulates for the axiomatic method. He has shown that the effects of Special Relativity are due to electrical feedback effects on finite size charge structures. Also he has shown that quantum effects such as the photoelectric effect and black body radiation are due to resonant effects in finite-size charge structures consisting of closed charge loops.

The improved electrodynamic force law derived by Dr. Lucas contains acceleration a terms for radiation and da/dt terms for radiation reaction. From this improved electrodynamic force law he has derived improved versions of the force of gravity and inertia which explain many previously unexplained phenomena such as the quantization of gravity as identified by Stanley Dermott\'s modern version of Bode\'s Law and the unusual gyroscope experiments of the British engineer Eric Laithwaite.

Dr. Lucas has identified a peculiar symmetry in the improved electrodynamic force law which is a combination of spherical and chiral symmetry. He shows that this symmetry appears in all elementary particles, atoms, nuclei, molecules, crystals, plant leaves, plant flowers, plant seed heads, the orbits of planets and moons in our solar system, the structure of our Milky Way galaxy, and the structure of the whole universe about its center.

All of these things lead Dr. Lucas to declare this this improved version of electrodynamics is the true universal force.

Dr. Lucas has noted that such a universal force will shape the structure of the cells in the brain leaving its fingerprint in the structures of linguistics, sociology, psychology, mathematics, and architecture. Many investigators have won Nobel Prizes for showing this structure. Finally Dr. Lucas has shown a relationship between the universal force and God as revealed in the Jewish, Christian and Islamic religions.