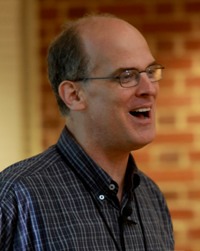 I attended Stanford from 1979 to 1984 as an electrical engineer and also took the entire core undergraduate curriculum in physics. I did not complete my masters in signal processing, but did work in optical character recognition (OCR) and CAD conversion. An entrepreneur at heart, I chose not to go into physics or engineering as a career, but have been a stock broker and investor, real estate broker, mortgage broker, landlord, music arranger, composer, business owner, and oil man. Though my formal education ended in 1984, my real education began about that time, with interests ranging from classical literature, money and banking (yes, conspiracy theories, etc.), Bible study, children's books, to, of course, physics. My introduction to Creation Science in the late 1980s transformed my worldview from one of openness to any and all ideas, religious or otherwise, to one convinced of the existence of absolutes.

My decision not to pursue physics as a career was based in part on the uneasiness I felt regarding the fundamental laws. My gut told me that in coming closer to the core of things, greater and greater elegance, not messiness, ought to prevail. God's laws ought to be based on a few unifying concepts, not on ad hoc formulas. But the reverse seemed to be the case. I was deeply troubled by the implications of Heisenberg's Uncertainty, and felt something must be amiss. Nonetheless for years on my own time I dabbled with some of my own ideas about the foundations of creation.

In the summer of 2007 Russ McGlenn directed me to the work of David L. Bergman and Dr. Charles William Lucas Jr. of Common Sense Science.  This Godsend reawakened my passion for physics at a time in my life when I was could devote some attention to serious study. Since then I have read everything I could find relating to Bergman's ring model and the classical foundations of physics (Prof. Andre K. T. Assis, Dr. Petr Beckmann, Dr. Peter Granea, Dr. Thomas E. Phipps Jr., Dr. Paul Wesley, Dr. Parry H. Moon & Dr. Domina Eberle Spencer, etc.), as well as the original works of the masters (Newton, Huygens, Faraday, Boltzmann, Mach, Planck, and of course Einstein).  I am convinced that the Common Sense Science approach holds the key to solving many fundamental mysteries in physics, but one piece missing from the puzzle is the connection of entropy with electrodynamics, on which I am currently working.