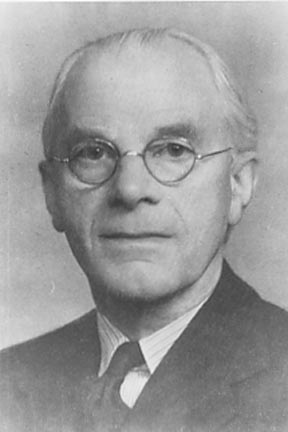 Herbert Dingle was a distinguished scientist and philosopher who was Professor of History and Philosophy of Science at University College, London, from 1946 to 1955. Before that he was Professor of Natural Philosophy at Imperial College, from which he had graduated in 1918. His numerous scientific distinctions included the presidency of the Royal Astronomical Society (1951-53) and of the British Society for the History of Science (1955-57); he wrote several well-known books and an enormous number of scientific papers.

The early part of Professor Dingle's scientific career was a period of intense interest in relativity, and he became an expert on the subject. Although an admirer of the theory, he was sceptical about the well-known clock paradox or twin paradox, and did not agree with its generally accepted resolution. After a prominent but inconclusive debate on the paradox, during the 1950s, he became convinced that the special theory, though mathematically impeccable, was physically impossible, and he spent much of his time and energy during the last 20 years of his life trying to persuade the scientific world that the theory was untenable. His criticisms of the theory: and his Socratic ability to ask questions that nobody else could answer, were not always well received.

Dingle was born in London, but spent his early years in Plymouth, where he was taken following the death of his father, and where he attended Plymouth Science, Art and Technical Schools. Due to lack of money, he left school at the age of 14 and found employment as a clerk, a job which he held for 11 years. At age 25 he won a scholarship to the Imperial College, London, from which he graduated in 1918. In that same year, Dingle married Alice Westacott who later gave birth to a son. As a Quaker, Dingle was exempt from military service during World War I. He took a position as a Demonstrator in the Physics Department, and devoted himself to the study of spectroscopy (following his mentor Alfred Fowler), especially its applications in astronomy. He was elected a Fellow of the Royal Astronomical Society in 1922.

Dingle was a member of the British government eclipse expeditions of 1927 (Colwyn Bay) and 1932 (Montreal), both of which failed to make any observations due to overcast skies. He spent most of 1932 at the California Institute of Technology as a Rockefeller Foundation Scholar. There he met the theoretical cosmologist R. C. Tolman, and studied relativistic cosmology.

Dingle was the author of "Modern Astrophysics" (1924) and "Practical Applications of Spectrum Analysis" (1950). He also wrote the essay "Relativity for All" (1922) and the monograph The Special Theory of Relativity (1940). A collection of Dingle's lectures on the history and philosophy of science was published in 1954. He also took an interest in English literature, and published Science and Literary Criticism in 1949, and The Mind of Emily Bronte in 1974.

Archives of his work