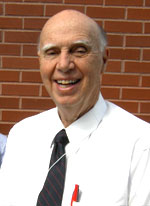 Neil Munch has had a life-long interest in space, advanced physics, cosmology, and an insatiable curiosity about most everything.

Currently retired from GE. Some of the rocket engines he designed were successfully flown are now on display at Smithsonian Air & Space Museum in Wash. DC. President of Munch Engineering Corp. (Incorporated 1984) Published aver 100 papers questioning modern physics some of which are also in referred journals.