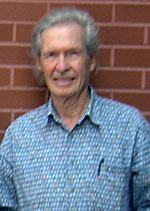 I, Alexander Alan Scarborough, am a Georgia native. The past 35 years of my research has resulted in the Fourth and Fifth Laws of Planetary Motion that, along with Kepler's First Three Laws, reveal much about our Solar System: its dynamic, fiery birth, how and why the ten original planets became geometrically spaced, the small changes in orbital velocities and distances of planets from the Sun since its origin, plus why and how its nine remaining planets are evolving through five stages of evolution at rates in accord with size and distance from the Sun. My LB/FLINE (Little Bangs/Five Laws of Planetary Motion-Internal Nucleosynthesis-Evolution) model takes the reader from the dark void of absolute-zero temperature to dense black holes (spheres) to galaxies, to multiple varieties of solar systems, and into the reasons Earth (and all planets) go through expansion cycles via internal nucleosynthesis (E=mc2). The above knowledge stems from my Energy Fuels Concept (1973-1980) that reveals the origin and intimate relationship of hydrocarbon fuels (gas, oil, coal) - not from fossils! My tenth cumulative edition on origins is scheduled for publication (2008) this summer: 325 pages, illustrated.

My career in Industrial Research and Development included innovation and development of new products, problem-solving and lab management with numerous patents. My concept of a durable double-density, washable Walk-Off mat, and subsequent solutions to problems spawned a multi-billion dollar industry on an international scale. Since my only A+ at Georgia Tech was earned on my Research and Development project there, it had seemed inevitable that my future lay in that direction.